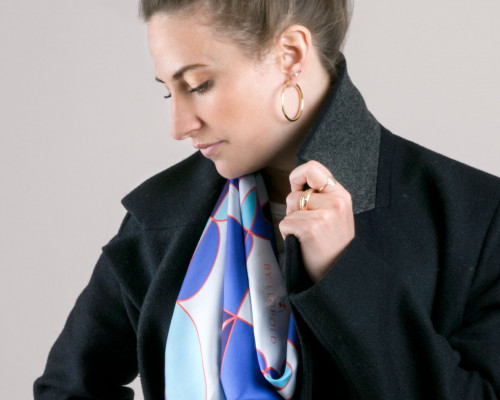 Taking its name from the “Provençal” term («foulat», light fabric), the scarf has been known for a long time. Originally called «un fichu», a piece of cloth, it is in the 19th century that the word scarf imposed itself and relegated the «fichu» to the popular rank. Cultural, political, religious, male, female, the scarf has proved to be as adaptable as a chameleon for centuries conveying very different messages. In Europe, the scarf, placed on the shoulders or on the head, was intended to protect people from the cold or rain. It was also a way to show one’s wealth.

By the end of the 19th century, the scarf had gradually swung into the fashion world to become a real fashion accessory. Today, the scarf is worn as much in the hair, around the neck, on the shoulders, around the hips as a belt or even on her handbag. It adds style and color to an outfit. In other words : a chance to have fun!